I love springtime east of the Cascades. The winter rain and snow has subsided, the days are longer; for a short period before the heat of summer arrives everything is green and bursting with life. Through the layered clay hummocks of the Painted Hills rise Chaenactis and Golden Bee-Plant; Prickly Pear and Hedgehog Cactus put on a show of sweet smelling blooms atop nearby Sutton Mountain; and the unmistakable fragrance of Sage and Juniper is simply intoxicating. The familiar cry of Coyote and the ancient stars of the Milky Way are reliable companions in the stillness of the desert night.

A collection of images from last May in the Painted Hills of Central Oregon. 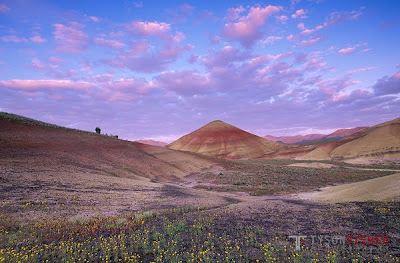 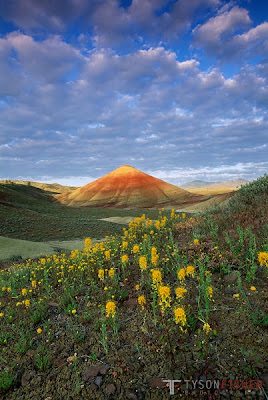 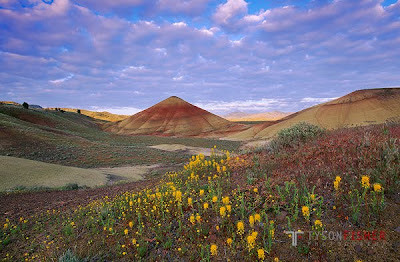 Posted by Tyson Fisher at 8:10 PM No comments: Links to this post

Where the Cactus Flowers Grow 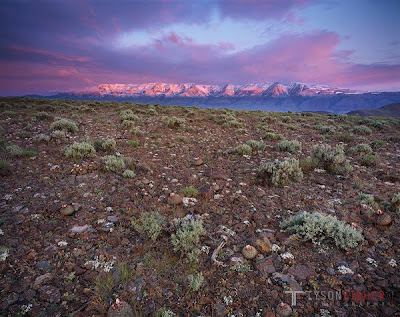 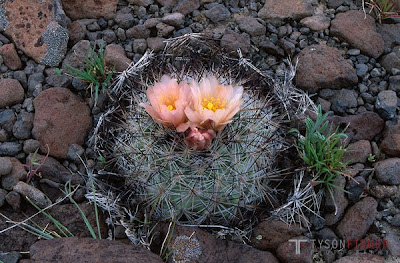 I've gotten a little behind with editing some of my most recent 8 x 10 images. Here is what I have so far. Stay tuned for more in the coming weeks. Thanks 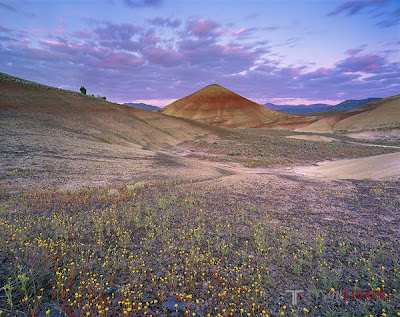 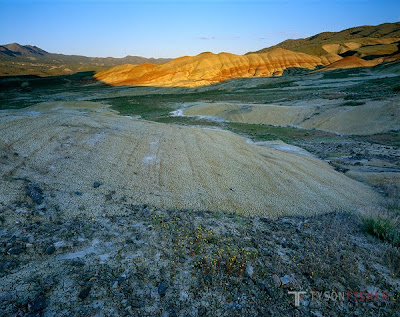 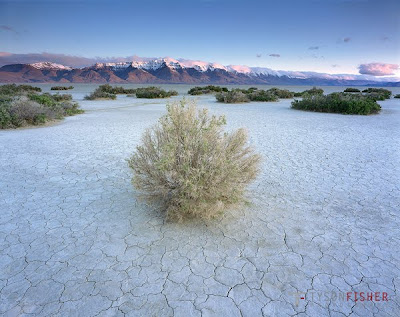 Sunrise over the Steens, Basin and Range, Oregon, Spring 2010

I have never experienced sustained winds that packed as much force as they did on this trip. The skies turned brown with dust during the peak of the storm; dust devils danced across the playa; and the occasional squall, given away by the wall of dust hurtling towards me, rattled the sagebrush and emerging wildflowers. Camped 5 mi out on the Alvord, I was a bit surprised when the winds calmed to almost zero during the night. Taking advantage of the respite, I awoke early the next morning and made this image as first light touched the east face of the Steens. 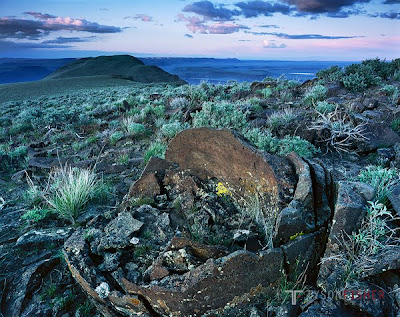 Resembling a cauldron, this chunk of weathered basalt has taken on its unique layered shape as a result of the endless cycle of freezing/thawing. Photographed at sunset as the last bit of light faded from the distant Sheepshead Mountains.

A series of emails were sent back and forth between a Geologist and a friend of mine in an attempt to find out the name of this basalt feature.

Strange rock? Put here by aliens or? What is this feature called? Help! -Jim

Weathering feature? Not sure it has a name. Jon may have a fancy name for it. -Terry

Tyson's Rock explained by a geologist:

Jim,
It is Steens Basalt, it looks like a superimposed pahoehoe toe, the general outlines resemble thoes of pillows, but are distinguished from true pillows by their pronounced concentric structure and lesser development of glassy margins. From: Basalts-The Poldervaart Treatise on Rocks of Basaltic Composition Vol.1, pg.11
-Jon

Steens Basalt it is. I like Jim's explanation best ;) -Tyson 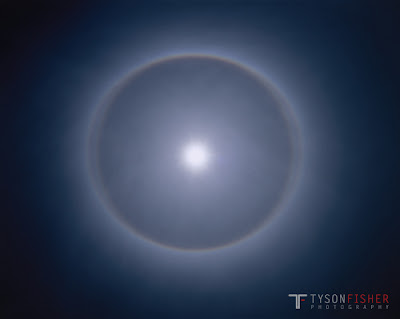 This meteorological phenomenon will always be one of my favorite subjects to witness and photograph. I cannot help but think of it as a magic portal into some kind of Astral Realm. This particular sunbow was so intense and so bright that I could feel its energy radiating downward. For two nights I camped high atop a mountain peak overlooking the Alvord Desert. This peak, a lonely isolated summit in Oregon's remote SE corner became a very special place for me during the spring of 2010. Over a 4 week period I watched it transition from winter to spring and, finally, summer. I watched the cactus flowers grow; I felt the sting of snow and sleet as it drifted across big open skies; and I observed the winter snowpack slowly fade from the precipitous eastern face of Steens Mountain. This spectacle of refracted sunlight took shape one afternoon, filling the entire sky as it brightened with intensity. Before the sunbow disappeared, double rings appeared around its outer fringes. Easily the most extraordinary example of a sunbow I had ever seen, I decided to capture it on my 8 x 10 camera. I had just enough time to expose one sheet of film before it dissolved into the afternoon sky. Artistically, my intention here was to deliberately underexpose the shot which I hoped would convey my interpretation of this otherworldly natural wonder. 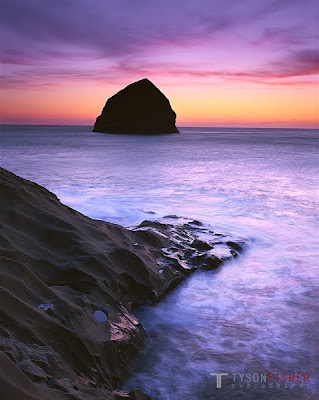 If the conditions are just right, winter sunsets over the ocean can bring some of the best color of the year. During the record setting cold snap in December of 2009 I decided to head out to the coast to experience some of the unique conditions there. The seas were calm and the temps were well below freezing the entire time. I hiked out to the very end of Cape Kiwanda to a scenic spot where the wave sculpted sandstone drops off into the Pacific. The strong east winds the state was experiencing at the time kept the marine layer at bay while bringing in some high clouds from over the coast range. These clouds serendipitously settled right into place as the sun dropped below the horizon. This was my first attempt shooting the coast with my 8 x 10 setup.