The view from Augspurger 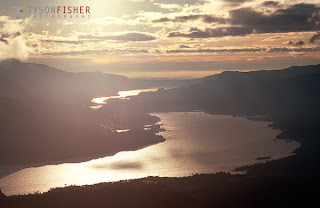 I occasionally like to bring my camera with me on trail runs. I'll toss it in my camelbak along with an extra lens, a couple split grads, an extra lightweight layer of clothing and a headlamp and I'm on my way. This lightweight approach to landscape photography is something I've found very liberating from the large format work I'm currently pursuing. There is something special about traveling through the landscape quickly and efficiently, ready to react and capture a fleeting moment of natural light as quickly as it comes and goes. Camera or no camera, there is a heightened sense of connectedness I feel with my surroundings when I experience nature in this fashion. A basic, lightweight camera setup is of primary importance when I choose to bring my camera with me. With the exception of maybe the Leica M9 and some of the micro four-thirds cameras, professional digital slr cameras these days are so big and heavy that it's not even practical to try and go running with one of those bricks in your pack. The Nikon D40 might be a good compromise. For the ultimate in portability, I'd like to experiment with the point and shoot Canon S90. For the time being, since most of my funds are fueling my large format work (new images on the way), I'm forced to stick with my trusty Nikon FM2 film camera. While a tad heavy for running, it is reasonably compact. If I had a lighter weight camera I would likely bring it running with me 100% of the time. It would be standard running gear. Since I don't, my approach is a bit more calculated. I typically go to areas I've been to before that I think might have potential for nice light either early in the morning or late in the evening. The late Galen Rowell, a famous adventure photographer, made many of his finest images using this fast and light approach. Through the use of small and light cameras, a keen eye and a deep connection to the natural world, Galen created a groundbreaking style of photography all his own. I can honestly say his vision and philosophies helped shape who I am as a photographer today. Here is a quote of his I've always liked:

"What I mean by photographing as a participant rather than observer is that I’m not only involved directly with some of the activities that I photograph, such as mountain climbing, but even when I’m not I have the philosophy that my mind and body are part of the natural world"
-Galen Rowell

Getting to the viewpoint from which I made the above picture required some pretty significant elevation gain. During a more normal non-el nino year one would have to snowshoe to this spot. With elevations around 3000' being more or less snow free late last January I was able to cruise on up there with no more than maybe 4'' of snow on top. This picture I felt best captured the view and mood from my vantage point. There wasn't much of a sunset this particular evening as clouds from an inversion layer to the east drifted in, completely obscuring the view. It was a peaceful run in the dark back down to the trailhead as croaking frogs a thousand or more feet below brought in the night.
Posted by Tyson Fisher at 9:10 PM No comments: Links to this post