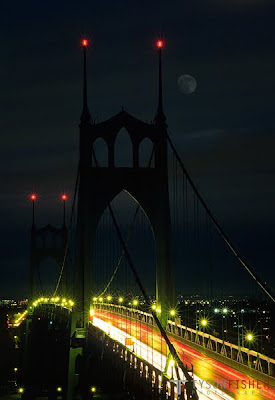 A night time rendering of the St.Johns Bridge and the silhouetted forms of the Gothic towers under a waxing moon, Portland, Oregon.

Here is my first attempt at photographing this amazing bridge. I made this image last month as the waxing moon approached full. Holiday rush hour traffic raced below, the moon marched upward into a winter sky, and behind me, a curtain of cool air crept down from the dark forested hills. As I waited for the light to fade, a small group of runners from the University of Portland ran effortlessly across the bridge. My thoughts trailed back to my one-year stint running for U of P. Starting from the opposite side of the river and a few miles south, our team would run across this suspension bridge and into the hills of Forest Park. Little did I know, years later this beautiful area of the city would become a place of endless photographic opportunity for me. On the edge of darkness, on the fringe of one cities wilderness, this window into Portland overlooks what is arguably the most beautiful bridge in Portland. 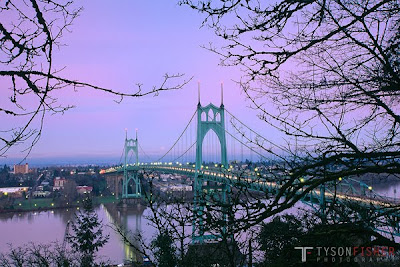 Here is my second attempt at shooting the St.Johns Bridge. During this months full moon, we were greeted with clear skies that glowed with the violet light of sunset. Typically, the best time to shoot the full moon is a day or two before it's completely full. At this time, the moon is higher in the sky and the exposure is close to that of the surrounding landscape. This month we had cloudy skies up until the day the moon hit 100% illumination. I was stoked the weather cleared, but I also knew the moon wouldn't rise until it was almost dark and the color in the sky was gone. This presented a couple technical challenges I had to work around in order to obtain the result I was after. I made one exposure at sunset. Then without moving my tripod, I made another exposure on the same frame of film after the moon had risen and the lights on the bridge turned on. Obtaining color in the sky, a lighted bridge and detail in the landscape would not have been possible otherwise.